Deep in the jungles of Panama, in a hidden permaculture community called Kalu Yala, over 130 brave goal-setters of many feathers met for a weeklong retreat. Truly separated from their comfort zones, these people quickly formed and fostered deep connections.

Secrets were shared. Dreams were planned. And it all came out of a group bubbling over with potential and passion: Thousand Network.

WHO WE ARE, AND HOW WE’RE DIFFERENT

Perhaps the strongest groups are the ones that survive stormy waters. Thousand Network was originally part of a group called Sandbox, until fundamental disagreements between the members and the investors came to a head.

When the investors decided to start charging membership fees and slash Sandbox membership to 1/7th of its current size, the members took to Facebook, mobilized, and formed an entirely new community on their own terms—Thousand Network. 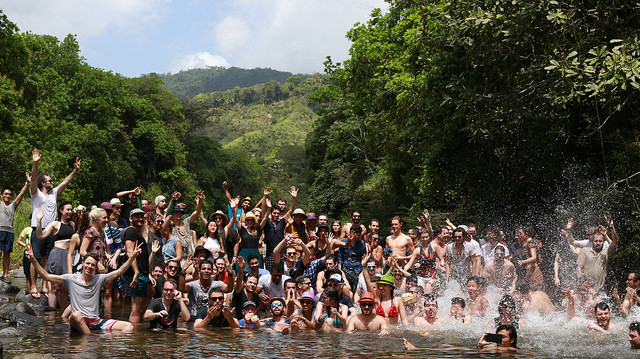 When you have the opportunity to build a community from scratch, what values become important to you?

“Curiosity,” says Allie Armitage, an ambassador of the Thousand Network DC hub.  “We’re seekers, hungry to learn as much as we can, exploring all kinds of ‘non-linear’ topics…we’re also curious to get to know each other below the surface.”

Natalie Copuroglu, of the London Hub, speaks about the group’s value of trust; “Every time I walk into a retreat, I feel this immediate sense of trust even if I’ve never met the people. I know we belong to the same network [and] have the same values.”

Tia Kansara, Chair of the Thousand Network, states how she sees a community “where each member empowers the other to be their better self.”

Other answers seen over and over again: Tenacity. Passion. Humility.  “Despite being surrounded by overachievers and impressive changemakers,” Natalie notes, “I feel people are very humble. People openly talk about their failures and what they learned from them.”

Thousand Network has built their mission around these values. The goal? 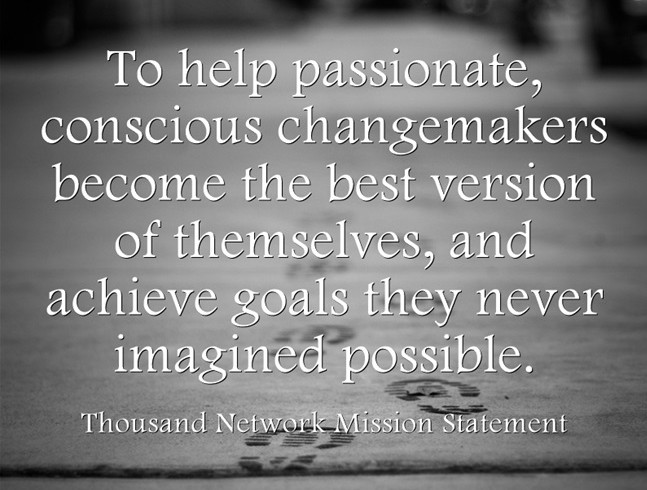 WHY WE WENT TO PANAMA

Insert the Panamanian jungle adventure. How does it fit in? Well, to build trust and connections among like-minded people, one of the most effective ways to break down barriers is to put everyone in the same boat—preferably far away from their comfort zones.

We slept in tents, and spent our days without wifi, cell phones, or even mirrors. To structure our days, we had a number of workshops to attend. 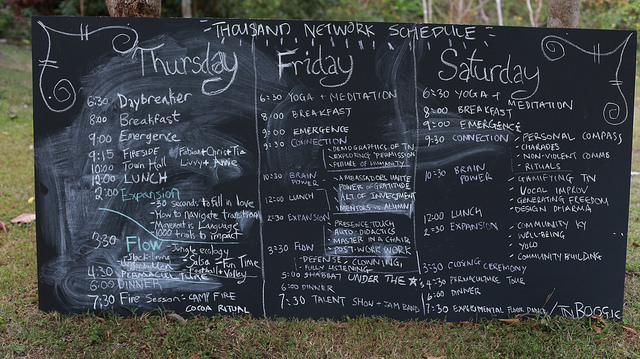 I held one about slack lining and goal-setting, and visited others like “What It Means to be Grateful,” “The 8 Types of Body Movements,” and “Unfuck Your Life,” which was a workshop that focused on breathing techniques and morning routines. 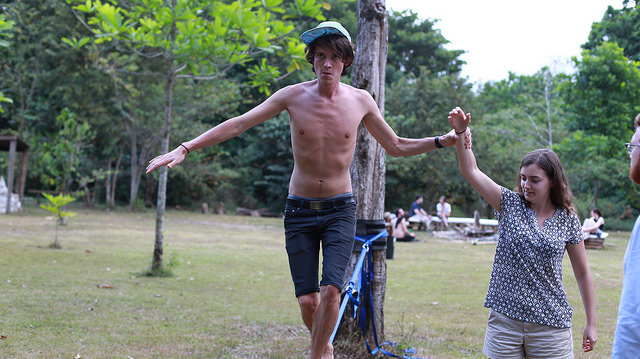 There was a workshop called “Fuck Up Night,” where people spoke about their failures, and the retrospective lessons they learned; another called “Presence in Touch” explored physical touch as a dimension of communication.

And others were overtly practical, like the permaculture garden walk, which showed participants how the garden had been designed to perform multiple jobs and maximize yield. 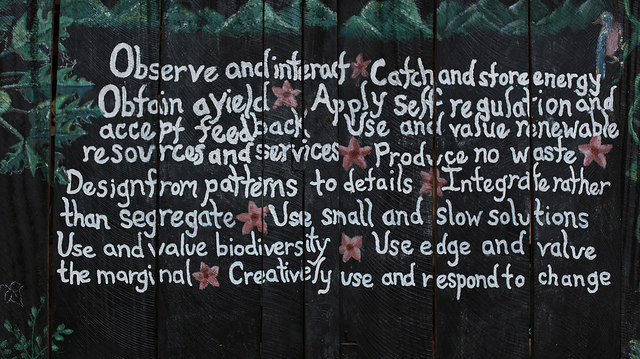 We had retreat-wide rituals, like the Cocoa ceremony. That night, we sat around a fire, the night pressing in on our backs. Each person got the chance to say, in one sentence, the one thing they immediately wanted to start doing. (Mine? To begin a morning routine.)

The atmosphere quickly became emotional and powerful. “It’s hard to find spaces to have those conversations and experiences as a community,” Allie says. “Raising our consciousness as a group? Magical.” 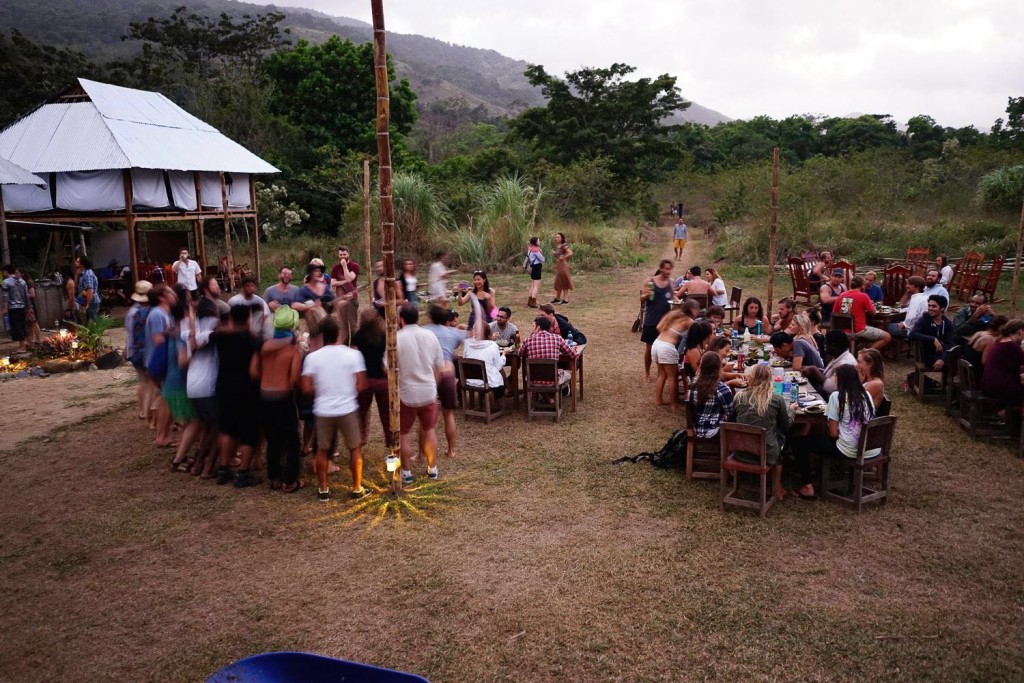 And then, of course, after full days of deep thinking and soul-searching, we spent our nights letting loose—and the parties were incredible.

A band (with full equipment) managed to make it to the middle of the jungle. We had a DJ on the river with a full bar. The fact that they made this happen at such a remote location was amazing on its own, and the performances were incredible to boot.

After this space of thinking, breathing, planning, and celebrating together, we came away with a greater unity, and bright eyes for the future.

WHAT THE FUTURE HOLDS

Some of the most common responses from the group: tighter structure. Weekly meetings and quarterly retreats. Getting more involved with the global network, and reaching out to inactive members to build the community.

Other ideas are unquestionably bright, and speak to the level of passion and optimism in the group. “Epic, systems-level change,” says Allie. “Pulling the future in to the world we live in now.”

And Zach Hamilton of the Los Angeles Hub agrees, “I look forward to seeing the network grow and attract even more incredible people that share a slightly different, and eternally optimistic, vision of the future.”

And in order to keep growing like we want to, and reach our goals, we need someone to really commit and take charge. Everyone has so many plates to spin, and it’s difficult to really give this group the elbow grease it needs.

But I hope that somebody who’s reading this—maybe you, right now—decides to make this their full-time job. Somebody who wants to embody these core values, and help take this incredible group up to the next level and beyond.

For the future, for the world…and for ourselves. To be the best we can possibly be.

What are your thoughts? What do you think of the Thousand Network weather you are part of it or not? Please let me know in the comments below!

Please note: The following article is based on my interpretation of Thousand Network and what it stands for. By soliciting responses from several active members about the community and retreat, I attempted to limit my biases. However, I am sure that things are missing. My goal is for this article to be a foundation that will help Thousand Network’s members clarify the organization’s identity and mission, as opposed to a perfect and holistic representation of the community.